The Café of Life was started in 1998 by a couple who had concern for the homeless in Bonita. They rented a small storefront on Old 41 where they offered friendly conversation and support over a cup of coffee. Many of these clients were veterans who lived in the woods or their cars. Many had problems with substance abuse and mental disabilities. The goal was to help them find a better way of living by finding jobs, a shelter, a shower house and provide other assistance. With volunteers they began serving soup from crock pots.

We outgrew that space when client numbers increased from a handful to double that. We moved to Liberty Lighthouse Church of God for three years. where we served a hot nutritious meal in a large hall that was cooked in their professional certified kitchen. We had clothing and canned food to take home, and provided financial assistance, literacy training and health care. When the church needed their space, we moved for 6 months to Victorious Life Church.

When Pastor Gonzalez moved from the church we found ourselves homeless again. Hours were spent looking for property to rent or buy in Old Bonita where the clients live. We went to 15 churches and community organizations. We then were able to serve 2 days a week in the community building and 3 days in the park under the Banyan tree. In September 2008 we were full time in the park. We had our challenges with the insects, rain and humidity of summer, and cold of winter but we made it work. It was particularly difficult when the city removed the picnic tables and people had to sit on the ground to eat.

Despite its challenges, the Banyan tree park was a wonderful place to serve. The Café worked because of the generous loving hearts of the volunteers who served with love and compassion. The clients helped each other and wanted to give back. Even in difficult times they trusted that we would be there for them. The Café is more then food and basic necessities; it is a place of warmth, hospitality, kindness, acceptance and friendship.

But our goal was always to find our own permanent home. We searched for over 8 years. There were 13 sites that we seriously considered before they were turned down by the city due to zoning restrictions or by “not in my backyard” neighbors.

There were times we felt rejected, misunderstood, and homeless ourselves but we never gave up as we feel a passion for what we do. We believe in our mission and have seen positive changes in many lives.

In 2013 we were blessed to find a place of our own. The members of the Women’s Club gifted us their building when they decided to close their club after 60 years. They felt compassion for the children eating on the ground and wanted to provide a better environment to eat. The city would not allow us to serve in the building so it is a place for our office, meeting space, storage and for supplies for our daily operations as well as a place for other not-for-profit agencies to meet.

On October 17, 2012 Bonita Springs City Council voted to proceed with the development of Leitner Neighborhood Park, a private/public partnership between the Café of Life and the City. It is built on over a ½ acre lot and includes a 928 square foot building that houses a serving kitchen, pantry, storage area and restrooms as well as a 1,856 square foot covered pavilion, playground and open play area, basketball courts, and a patio with barbeque grills. The Café uses the area Monday to Friday mornings and the residents utilize the park from noon until dusk and on the weekends.

Due to a successful capital campaign and the compassion and generosity of Bonita Spring’s residents we were able to break ground in December 2012,and the Leitner Neighborhood Park dedication was April 25, 2014. Over 200 people were in attendance at a neighborhood party where there was a face painter, balloon maker, a mariachi band and delicious ethnic food. We want the neighbors to take ownership of their park and to bring more services to the needy people of that area too. 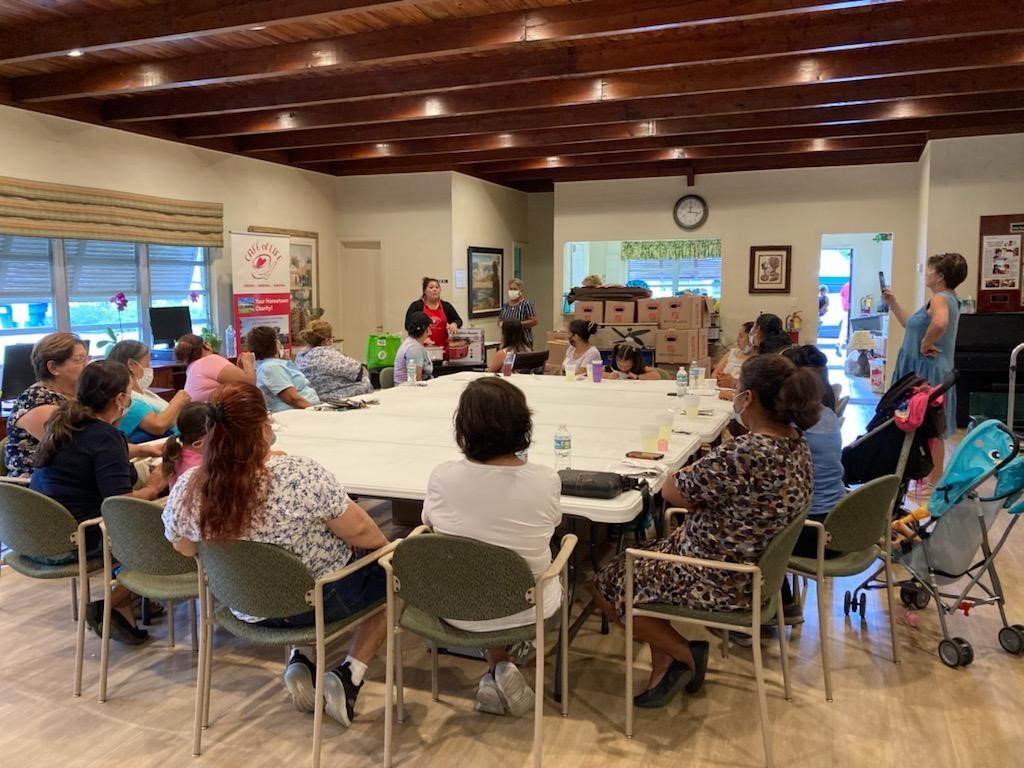